How To Create Bigger Goals And Rise Faster After A Fall 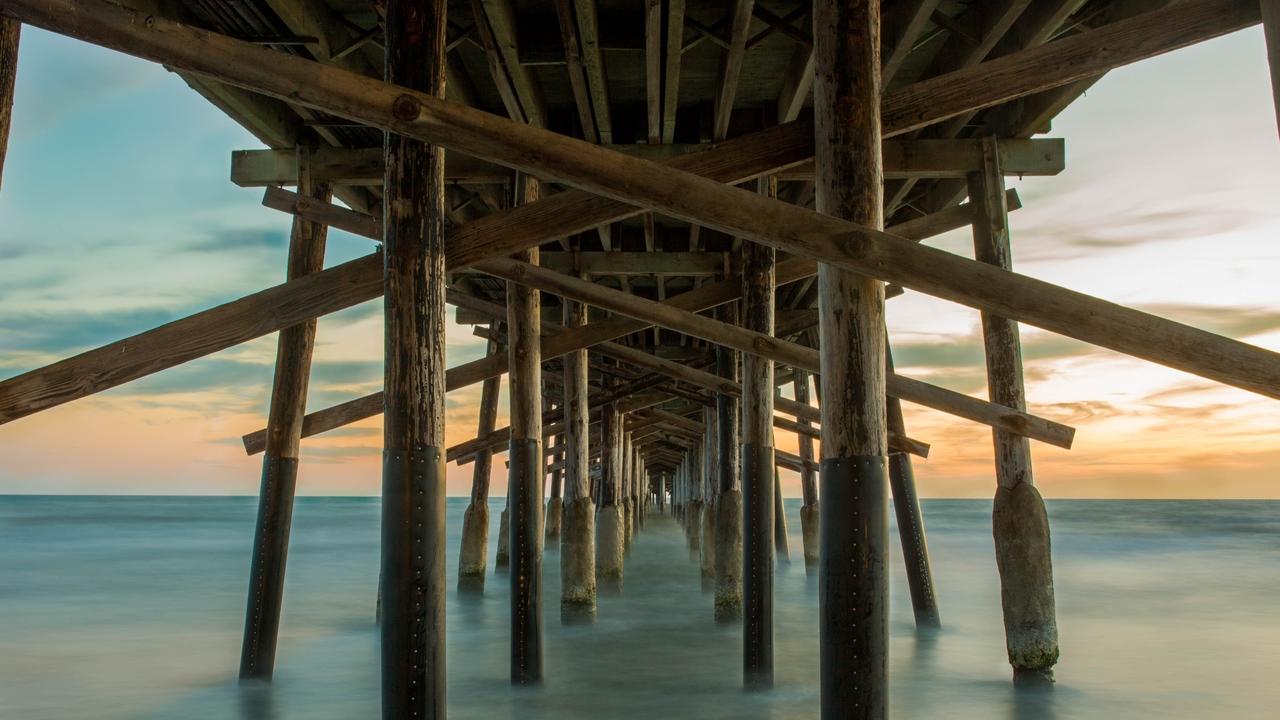 Photo by Scott Trento on Unsplash

It's a fact - we fail more than we will succeed.

Accept this, embrace this fact before you begin, and you get the toughest part out of the way.

As Brian Tracy says in his book, Eat That Frog, "Do the hardest thing first" and then the rest becomes much simpler.

By doing this, you begin to wire your mind early on into believing something new about itself and starting the day, the week or your project off with a strong win.

I have never really been good at math, but I recently saw these stats by one of baseball's greatest legends, Babe Ruth, and it made me think. 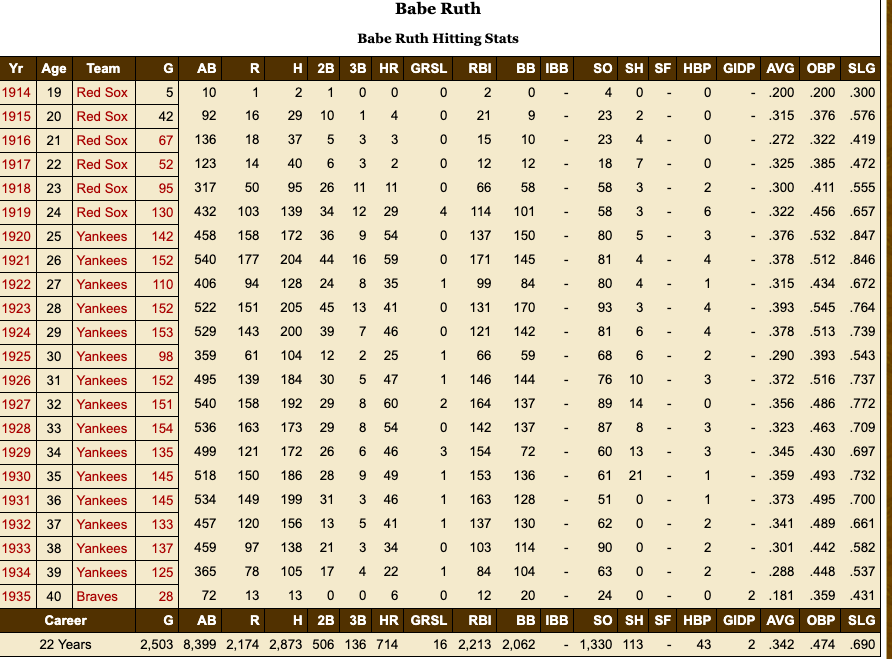 That means that he struck out 65.8% (to be as precise as possible) of the time.

Babe Ruth struck out close to 2/3 of the time he got at bat.

But wait, it gets even better!!!

If anyone knows failure, if anyone understands progress and probability, it was Babe Ruth.

To add further context to the point I want to make, are three screenshots from the above chart.  The figures above show the years where Babe Ruth hit the most home runs.

The home run number is to the far right and the times at bat is 5 numbers to the left of the HR number.

When you focus on the goal and not the 2/3rds strike outs, you gain confidence within yourself to stay committed and to have a relentless approach to accomplishing your goals for who you become along the way.

Babe Ruth is just one of many examples of people who decided to keep leading by example and getting back up to bat as often as possible because he knew that was one of the main ways to keep improving.

He could have been deterred by the 66% of strikeouts, and quite possibly, he might have been at times, but nonetheless, he always came back and got back at bat and did his best.

Babe Ruth also said one other thing that really stuck with me and I hope that it can move you as much as it moved me.  He said,

"The way a team plays as a whole determines its success. You may have the greatest stars in the world, but if they don't play together, the club won't be worth a dime"

We get up faster, we reach higher, when we are held up by stronger foundations, by a better support system and by stronger beliefs and values. 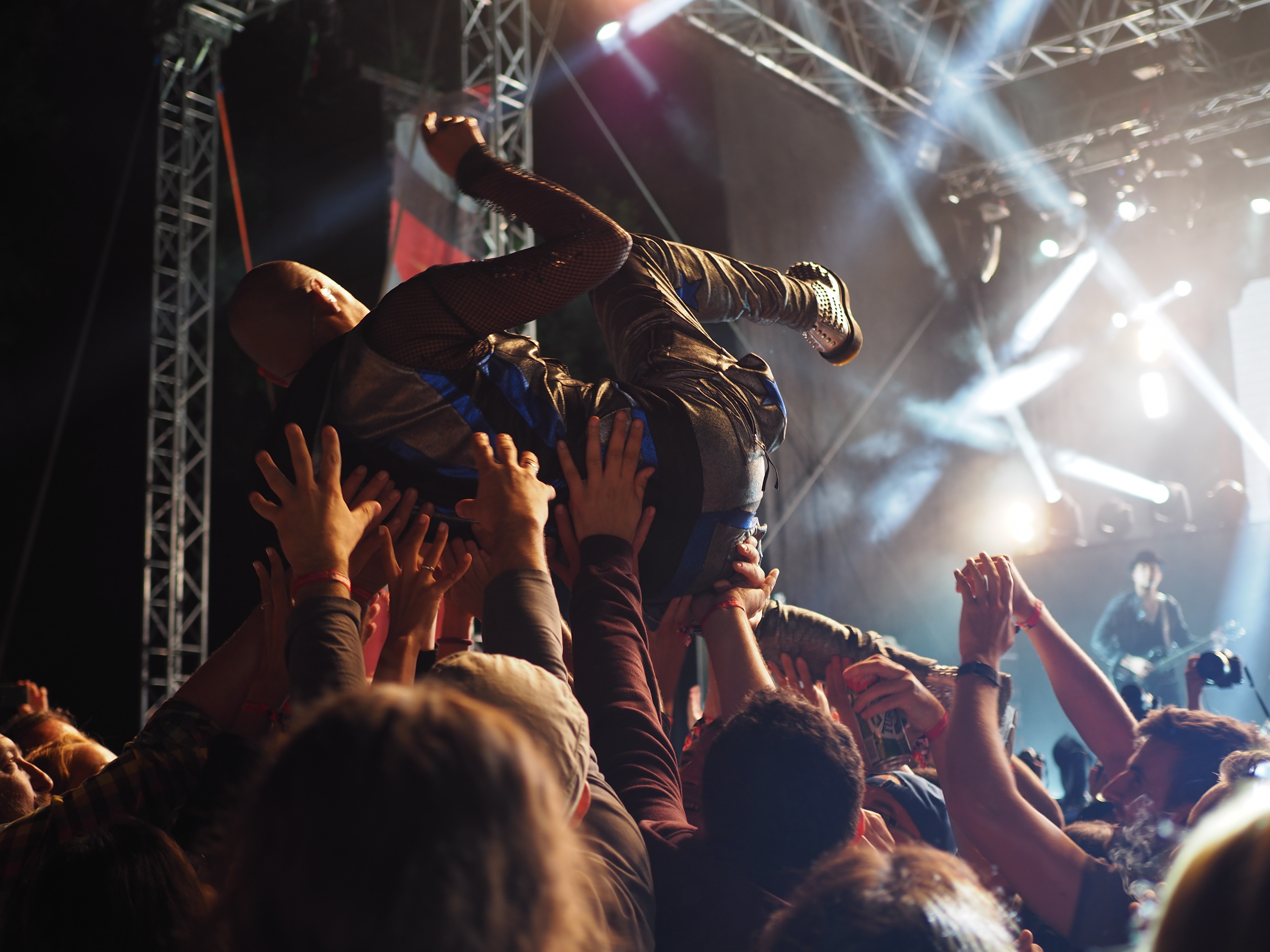 Photo by lifesimply.rocks on Unsplash

We build and sustain our confidence by the systems and environment that we create around us.

And we build them with greater levels of diligence, detail and dedication when we accept the fact that we will fail more than we will succeed.

Now, I'm not saying don't focus on success - what I'm saying in context is to remember that failure is a part of success and by creating the systems that will support us when we fall, the faster we will get back up and continue to stay in the game as Babe Ruth did and the bigger the dreams we create.

The better and sounder, the more solid your foundations, the more certainty and clarity you create for yourself and the bigger you can dream.

Most people are so scared of creating huge, audacious, vibrant dreams because they say to themselves, "what if I fail?'

And that can be a debilitating question depending on the quality of the belief systems that you have created for yourself.

For example, if one of the beliefs you created says, "I am not worthy" or "I am not enough" or "I don't know what I want," then when failure comes, you just won't get back up and you will stop right then and there.

If, on the other hand, the value system and belief system you created says, "I expect failure," "I learn from failure," "I am strong and brave," "I will continue because I am committed to becoming better and learning from my experiences," then, YOU GET BACK UP FASTER, YOU MAKE YOUR GOALS CLEARER AND BOLDER, and you get at it again with a fresh mindset and perspective, re-energized to make it happen.

If you want to create bigger goals and bounce back faster after a failure, remember that the legends who created legacies and masterpieces all had a few things in common:

1.  They created more meaningful outputs than anyone else

2.  They stayed in the game longer than anyone else.

If you find yourself having a hard time getting back up, or find that you are going through the motions or disconnected from your dreams.  Then ask yourself the following questions:

what have I created to support me and my journey?

what setbacks or missteps have I planned for?

what beliefs do I currently have about what I am experiencing?

what values am I living from?

who do I want to BE as I moved forward with my endeavors?

if I was accomplishing and attaining my goals, who or what would be around me?

what would I have to consistently believe to succeed?

what must I stop doing that is draining my energy to get up and envision with greater clarity and intensity?

what are my current levels of energy and enthusiasm?

who needs me to succeed?

whose life do I have the power and responsibility to change?

To be able to create bigger goals, we need stronger foundations.  In order to get up faster so that we can keep increasing our learning opportunities and "at bats," we need a great team that we can fall back on.

One last example I would like to give you, to bring the importance of this post to greater clarity - is the example of riding a bike.

When you first learn to ride a bike, you start with training wheels on -  your stiff and rigid and your thinking about not falling, or you're saying to mom, dad or the person teaching you, "please don't let go."  The better you get, the more enjoyable it becomes to ride your bike and you eventually look forward to it, eventually, you don't want anyone holding you back.

As you keep improving, you begin to take one training wheel off until eventually, you take them both off.  You have now built up some courage but occasionally, the fear of falling still creeps in and you feel yourself tightening up and the enjoyment seems to leave you temporarily.

For those that wish they never got started, quickly move to safer things as they didn't see themselves improving and cannot seem to find the enjoyment amidst the fear and discomfort.

When we enjoy what we are doing, through the ups and the downs, we create strong beliefs and value systems that allow us to dream bigger and get up faster when we fall.

When we don't have support systems in place and when it becomes harder to sustain the motivation through the tough times because what we fall back on are poor motivations, weak belief systems and inconsistent habits, it becomes easier to stop and choose the safer and less challenging way.

Seek ways to inspire consistent curiosity, clarity, enjoyment, creativity and challenge because it is through these and with these values as your foundation that you will build the momentum to bust through small ways of dreaming and living.

More than just a mantra or catchy phrase, WIN FROM WITHIN is a philosophy that will help you live with greater clarity, confidence, momentum and engagement with what matters most.